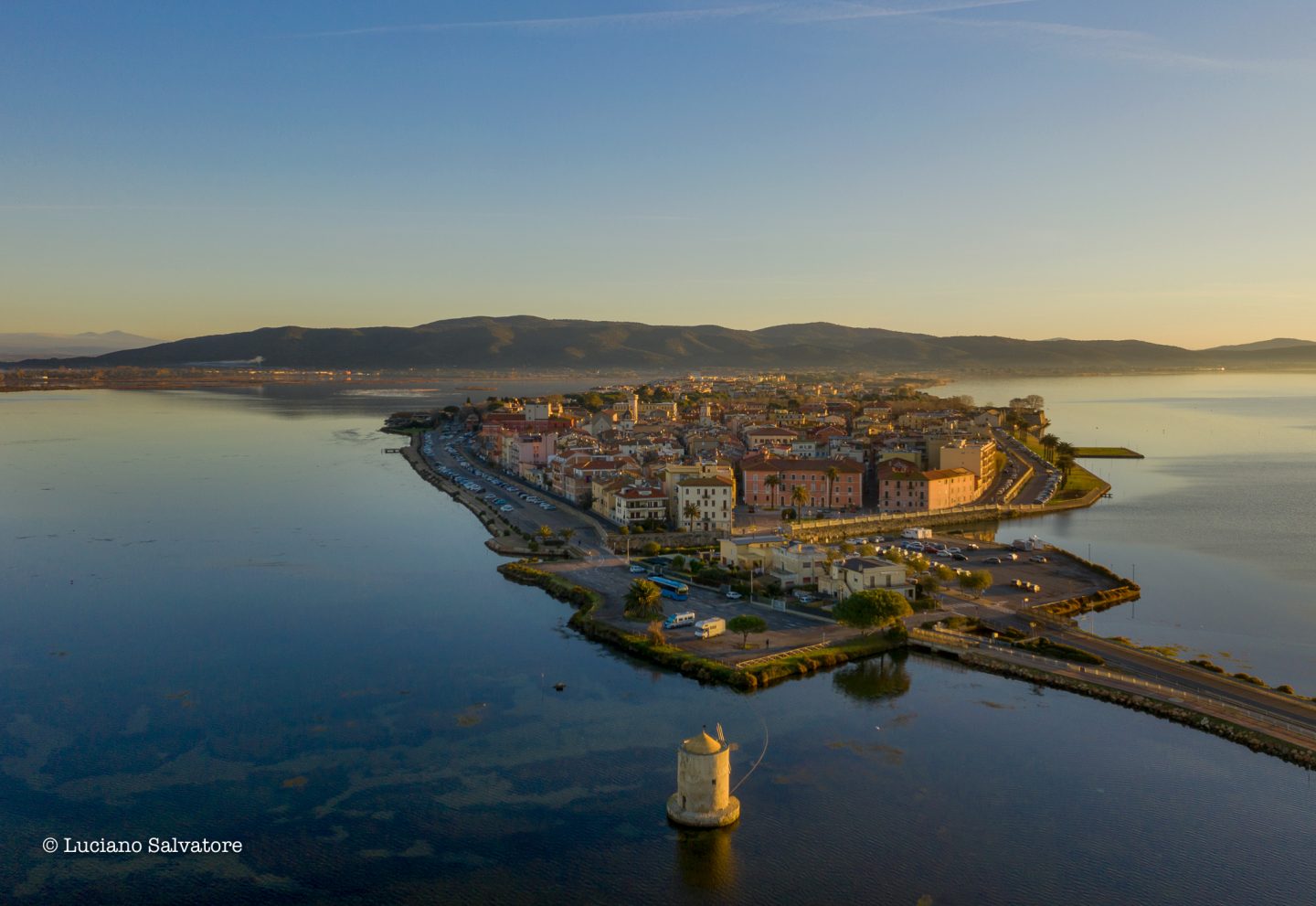 Our Municipality, What to see 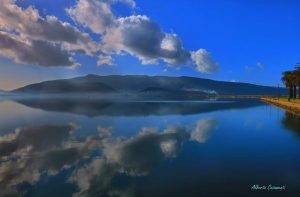 Orbetello is an Italian town in the Province of Grosseto, in Tuscany.

It is located in the middle of the homonymous lagoon and is joined to Monte Argentario by an artificial dam (built in 1841 by Leopoldo II of Lorraine) which divided the lagoon into two bodies of water: Laguna di Levante and Laguna di Ponente. Orbetello comprises three districts: Orbetello Centro constitutes the historical part; Neghelli is the modern district and Orbetello Scalo is the most recent and decentralized district, located near the railway station, from which you can directly reach the historic center along the pedestrian and cycle path (about 2.5 km) or for the lazy ones , comfortably by bus.

Orbetello was an Etruscan settlement since the 7th century BC, around it imposing polygonal walls were erected (5th century BC), which are still visible today. In the third century BC, with the Romanization of Etruria, the most important event was the construction, in 273 BC, of ​​the colony of Cosa (in Ansedonia). In 805 the Orbetello area was donated by Charlemagne to the monks of the Abbey of the Tre Fontane, who, in 1269, succumbed to the insistence of the Aldobrandeschi and signed an agreement with the counts, thus the new masters arrived in Orbetello. The Aldobrandeschi family held it until 1303, when Orbetello passed under the control of Orvieto. In 1358 the town passed to the Orsini counts. Another episode worth mentioning is the famous “shipwreck” of Pope Gregory XI, who, returning from Avignon (1376), was surprised by a storm off the Giannella and to escape the fury of it landed in a bay, immediately renamed Santa Reparata (today Santa Liberata), where it was triumphantly welcomed by the fishermen of the lagoon and where it will remain for a few weeks. In 1414 the lagoon town was conquered by the Sienese who held control until the end of their Republic and, in 1557, Orbetello was proclaimed capital of the State of the Presidi, thus passing into the Spanish sphere of influence. In 1646 Orbetello suffered a terrible siege: for more than two months the French kept the city in check but it resisted heroically. In 1707 the Austrians took over from the Spaniards, then, in 1737, the Bourbons of Naples. In 1801 Napoleon reunited it with the Kingdom of Etruria, suppressed in 1807, the year in which the Grand Duchy of Tuscany was restored and Orbetello became part of it. In 1860 Giuseppe Garibaldi reached Orbetello (after disembarking in Talamone) and supplied himself with ammunition for the Expedition of the Thousand at the then Guzman powder magazine, now home to the Archaeological Museum. In 1861 Orbetello was annexed, like all of Tuscany, to the Kingdom of Italy. In 1913 the Orbetello – Porto Santo Stefano railway was inaugurated. Between 1928 and 1933 Orbetello spent one of its heydays extending its fame overseas by virtue of the four Atlantic crossings conducted by General Italo Balbo: 1928 – Western Mediterranean Cruise (Orbetello – Los Alcazares); 1929 – Eastern Mediterranean cruise (Taranto – Odessa – Orbetello); 1930 – First Atlantic Cruise (Orbetello – Rio De Janeiro); 1933 – Second Atlantic Cruise (Orbetello – Chicago – New York – Rome).

WHAT TO SEE IN ORBETELLO

– Dam: built in 1841 by Leopoldo II of Lorraine, it joins Orbetello to Monte Argentario and divides the Orbetello lagoon into two bodies of water: the Levante Lagoon and the Ponente Lagoon. Until 1944 the railway that connected Orbetello to Porto Santo Stefano also passed through it. 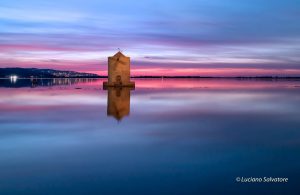 – Mill: the only remaining windmill of the series of nine built by the Sienese and subsequently restored by the Spaniards. The mill emerges suggestively from the waters of the lagoon and represents one of the symbols of Orbetello; it is circular in shape with a conical roof and rear wind propeller and, together with the others, it was used to grind the grain that was brought with the barchini (typical Orbetello boats) to the inhabitants of the city.

– Church of San Francesco da Paola: from the Spanish period, it is characterized by the unique sixteenth-century façade that very much evokes the Spanish stylistic elements.

– Palazzo del Municipio: located in Piazza del Plebiscito, where the Monument to the Orbetellani Fallen of the Great War (1915 – 1918) stands centrally. On the facade of the Town Hall, in addition to various ancient coats of arms, there is a bust of Vittorio Emanuele II, the work of the Florentine sculptor Fantacchiotti, inside a niche. 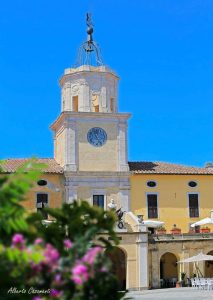 – Governor’s Palace: located in the central Piazza Eroe dei Due Mondi and dating back to the Spanish period, it is preceded by a portico-loggia that once showed the power of the State of the Presidi; from the Palace stands the Clock Tower and in the center of the portico is the bust of Garibaldi made by the sculptor Ettore Ferrari.

– Cathedral of Santa Maria Assunta (or Duomo): built on the remains of an ancient Etruscan-Roman temple rededicated to Christianity at the time of Honorius, it was restored by the Orsini in 1375 with a neo-Gothic facade. 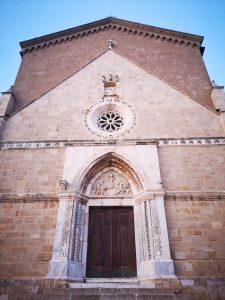 – Former Caserma Umberto I: the building, of nineteenth-century origin, was used as a barracks after the suppression of the ancient Convent of the Poor Clares (dating back to 1651) in 1808. Currently the building houses various houses and offices, and is the seat of our Touristic office.

– Church of San Giuseppe: built during the 18th century, it was restored several times over the centuries (the last renovation was completed in 2013). Inside we can admire the eighteenth-century high altar bearing a painting entitled “Angels in adoration of the monstrance” and in the central part, a mosaic with the “Death of St. Joseph”. Also important is the eighteenth-century wooden statue of the “Immaculate Conception”.

– Walls: of Etruscan origins, most likely dating back to the 5th century BC, they were enlarged and restored first in the Middle Ages and then in the late 16th century. The Cyclopean walls are still in a good state of conservation along Via Mura di Levante. 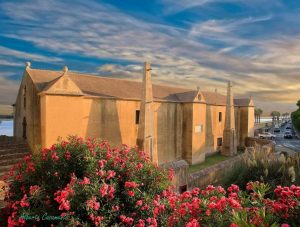 – Former Guzman powder magazine: built by the Spaniards in 1692 and used as a powder magazine containing tons of explosives; in 1860 Giuseppe Garibaldi, who reached Orbetello after landing in Talamone, supplied himself with ammunition for the Expedition of the Thousand (eleven Orbetellani offered to follow him in the enterprise). Today it houses the Archaeological Museum.

– Former Airport “A. Brunetta ”(ex Idroscalo di Orbetello): she played a role of international importance at the time of Italo Balbo’s Transvolate Atlantiques. Built in the early twentieth century and destroyed in 1944 by the German occupation forces.

– Porta Medina Coeli (or Porta Nuova): its name originates from the Viceroy Don Aloisio de la Cerda, Duke of Medinacoeli who wanted it to be renovated (completed under the reign of the King of Spain Charles II in 1697). It is the most recent and most impressive gate of Orbetello. Placed above the roof of the door we find the Statue of San Biagio (Patron of Orbetello), the Saint faces the city with one arm raised in blessing and with a crosier in the other.

– Porta Senese: it is the oldest door, currently walled up but still perfectly visible.

– Porta del Soccorso: its name dates back to an episode of arms that occurred in the Franco-Piedmontese siege of Orbetello (1646). Built in 1620 under the reign of the King of Spain Philip III and the Viceroyalty of the Duke of Ossuna; on its left the Burgos Bastion is still visible.

– Porta Esterna di Terra (completed in 1692): in Baroque style, it is covered with granite and travertine. The signs of a drawbridge that has now disappeared are very evident.

– Mausoleum of the Atlantic Transfers: in memory of the brave participants in the 1933 venture led by Italo Balbo.