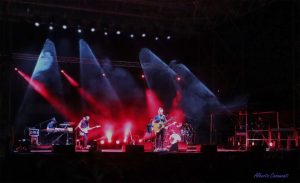 There are three editions of the review organized by the Municipality of Orbetello with the collaboration of the Società Ad Arte Spettacoli, which took place in August to bring music, theater and dance performances to the lagoon. Unfortunately, the fourth edition was canceled due to the COVID-19 health emergency. The location where the event takes place is something extraordinary: an open-air theater on the lagoon with the suggestive Orbetello Mill as a backdrop, one of the city’s greatest symbols. Even the posters that the Le Crociere Festival proposes every year are increasingly varied in order to meet the demands of the public and inhabitants and to involve people of all ages. The Le Crociere Festival ranges from music to comedy, passing through the great one man shows: Massimo Ranieri, Francesco Gabbani, Francesco De Gregori, Pio and Amedeo, Momix, Negrita, Rocco Papaleo, Enrico Nigiotti, Vittorio Sgarbi are just some of the many names that have performed in the Orbetello review.