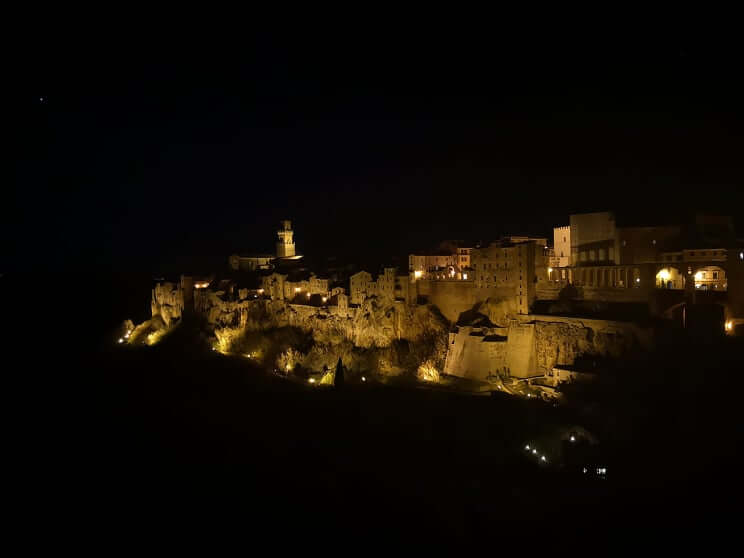 The tuff area is an enigmatic territory full of great charm: it is on the tufaceous rocks that there are ancient villages, medieval fortifications and centers of Etruscan origin. Extended in the heart of the Fiora hills, in the south-eastern part of the Province of Grosseto, it includes the municipalities of Sorano and Pitigliano and a part of Castell’Azzara can also be included. Tuff, a very friable magmatic rock, is the predominant feature of this southern area of the Maremma Grossetana.
In these places the necessary conditions for ancient human settlements were present. In fact, it is precisely in the tuff that houses, monumental necropolises and unusual streets have been excavated since the earliest times, such as the cave roads that connect the various settlements and necropolises in the area between Sovana, Sorano and Pitigliano. These streets are long corridors of one kilometer and three meters wide with walls as high as twenty feet, probably traced by the Etruscans as a defense system against possible invaders and to connect inhabited centers with waterways; even if in this regard numerous hypotheses have been made about their real function.
In the surroundings of Pitigliano, one of the most evocative villages of the Tuscan Maremma, called the Little Jerusalem for the large Jewish community, there are eight of these cyclopean routes. An ingenious rainwater canalization system divides the quarry road into two parts, creating two wide sidewalks. These areas have now become the refuge of many endangered animals, being also characterized by ideal microclimates for the reproduction of rare floristic species. The Città del Tufo Archaeological Park is undoubtedly of great importance, inaugurated in 1998 with the aim of enhancing and protecting the very important historical and cultural heritage that has remained unchanged for centuries. The Park is located in the municipality of Sorano, which also includes the suggestive village of Sovana, extends for sixty hectares and is a very important container of the main historical and archaeological treasures of the territory, namely the Etruscan necropolis of Sovana, one of the most extraordinary for the variety of tombs. Characteristic is precisely the location of the tombs, on rocky walls, between valleys and valleys, in a scenario that suggests Dante’s hell. The Archaeological Park also includes the Etruscan Museum of Sovana, the Renaissance Museum of Sorano and various sites such as Vitozza, Poggio San Rocco and some vie cave.